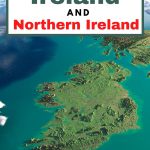 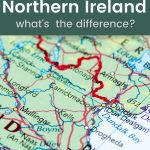 The reason for them being two separate countries is briefly discussed further on but be warned. This can be quite a contentious topic when brought up with people who live in the two countries. It stems from the long history of Ireland and Northern Ireland.

So, let’s dive into the difference between Northern Ireland and the Republic of Ireland.

As mentioned, the main difference between Ireland and Northern Ireland is that they are two separate countries. The Republic of Ireland, often just denoted as Ireland, is an independent sovereign state, while Northern Ireland has been a part of the United Kingdom since the 3rd of May 1921.

Ireland is a member of the European Union (EU), while Northern Ireland is not as a result of Great Britain leaving the EU (called Brexit).

There is no physical border between Ireland and Northern Ireland, having been abolished as part of the Good Friday Agreement. While there had been some worries about the fate of the invisible border between the two countries with Brexit, this is no longer a worry as there is an agreement that the physical border will not be reintroduced as a result of Brexit. Goods and people can travel between Ireland and Northern Ireland without checks.

Northern Ireland will still follow many EU rules and as Ireland is a member of the EU, this allows for the invisible border to remain. However, there will be a regulatory border between the Republic of Ireland and England and Wales, and one between Northern Ireland and the rest of Great Britain. This information was taken from here. You can find a further explanation in this article.

Other key differences between the Republic of Ireland and Northern Ireland

Each country has its own flag. The flags of Ireland and Northern Ireland are very different. The flag of the Republic of Ireland is the Tricolour of green, white and orange. The official Northern Ireland flag is the Union Jack of Great Britain. The Northern Ireland government used to use the Ulster Banner from 1953 until 1973 when both the government and parliament were abolished. However, it is still occasionally used by some loyalists and unionists.

Ireland vs Northern Ireland – Other differences

Here are some other differences between the two countries of Ireland.

The Republic of Ireland is a ‘parliamentary constitutional republic’ whose Head of State is the President of Ireland, currently Michael D Higgins. The president is elected by the people of Ireland and they, in turn, nominate the Taoiseach. The Head of Government is the Taoiseach (or Prime Minister) and is responsible for appointing members of government. The Executive Authority of the country is given to the Taoiseach, Tánaiste (deputy PM) and the members of the Dáil (Assembly of Ireland). The legislature is powered by the National Parliament known as the Oireachtas which constitutes Dáil Éireann, Seanad Éireann, and the 4 Courts of Ireland – District, Circuit, High and Supreme courts.

Northern Ireland is a part of the United Kingdom whose Head of State is the British Monarch, currently Queen Elizabeth II. Northern Ireland has a devolved government headed by the First Minister and Deputy Minister. The legislature is powered by the Northern Ireland Assembly with a Speaker who presides over the NI Assembly with 3 deputy speakers. Judicial Power is held by the Lord Chief Justice of NI and 3 Courts – the Supreme Court of the UK, the Court of Judicature and the High Court comprising the Court of Appeal, the Crown Court and the County Courts.

The island of Ireland is a mostly Christian island in terms of religion. The Republic of Ireland is a predominantly Catholic country. However, Northern Ireland has a higher proportion of Protestant Christians.

The accents in both countries are also very different. The accent in Northern Ireland has influences from the Republic, Scotland and England and is noticeably different from accents of the south.

To understand why Ireland and Northern Ireland are separate countries, you need to delve into the history books somewhat and go back over 800 years ago. This history gives an insight into the division and the Ireland/ Northern Ireland conflict of modern times.

The ‘800 years’ of British rule began with the Norman invasion of Ireland. In 1169, English barons, led by Strongbow, originally came to the aid of the King of Leinster in a squabble. Two years later King Henry II landed with substantial troops forcing Strongbow and remaining Gaelic Irish lords to accept him as their King.

In 1534 King Henry VIII declared himself Head of the Church of England and with this, King of Ireland. Irish Lords led by Lord Thomas Fitzgerald attempted a rebellion against the crown which was swiftly quashed. Henry also ordered the dissolution of the monasteries after his spat with the Catholic Pope and passed church land to the new Anglican Church (Protestant).

In 1594 the Earl of Tyrone began a rebellion in Ulster which lasted until his defeat and surrender in 1603, a period known as the Nine Years War. This signalled the end of Gaelic Ireland and a renewed colonisation through plantations, where Loyal Protestants from Scotland and England were given confiscated lands. This sowed the bitter seeds of division that linger today.

In 1695 the Penal Laws were introduced in which Catholics were stripped of basic rights which included a prohibition from owning a horse, marrying outside their religion and buying or inheriting property. At the same time Irish music, culture and education were banned in an effort to eradicate Catholicism.

After several more rebellions against British Rule, the Act of Union was passed in 1801. This united Ireland politically with Britain. Irish Parliament was dissolved and direct rule from Westminster introduced.

In 1829 Daniel O’Connell achieved the Catholic Emancipation Act, reinstating some rights to Catholics. Although voted as a Member of Parliament, he was unable to take his seat because he was Catholic. He went on to become the first Lord Mayor of Dublin.

Between 1845 and 1851 the Great Famine arrived in Ireland. Potato crops failed due to blight and over 1 million died, and many more emigrated due to the famine. Food aid was opposed by the British government and much of the remaining good crops were exported abroad, most of it to Britain. The Great Famine left a huge scar, both culturally and socially, on the Irish people.

However, changing times were afoot. Between 1886 and 1895 the British Prime Minister, William Gladstone, tried to introduce Home Rule in the House of Commons, which was initiated by Charles Stewart Parnell. This was a demand that Ireland’s governance be returned to home soil in Ireland from Westminster. This was opposed by a loyalist group that founded the Ulster Volunteer Force (UVF), whose members swore to resist any attempt to impose Home Rule on Ireland.

Home Rule was eventually passed in 1914 but was put on hold due to the outbreak of World War I. With Britain at war, rebellion factions in Sinn Féin, the Irish Volunteer Force and the Irish Citizens’ Army saw their chance to rise up against the Crown.

On Easter Sunday in 1916, a group of Republicans took the General Post Office in Dublin, led by Pádraig Pearse, who declared Ireland a republic. After 6 days of fighting, the Republicans surrendered and they were taken to Kilmainham Gaol where 15 of them were executed. Support for Republicans grew swiftly following this event.

In 1918 the Republicans under the banner of Sinn Féin won a large majority of Irish seats, declared independence and formed the first Dáil Éireann. This was an act of war and the Irish War of Independence ran from 1919 to 1921, until the Anglo-Irish Treaty was signed. This created the Irish Free State of 26 counties and the 6 counties of Ulster which remained in the UK.

The Treaty was imperfect. Some believed it was a stepping stone towards full independence, while some saw it as a betrayal of Republican ideals and a cessation of opposition to British Rule. However, the Irish Free State eventually became the Republic of Ireland.

In 1969 marches in Derry by the Northern Ireland Civil Rights Association were disrupted by Loyalist attacks and heavy-handed police action, and this marked the beginning of what is known as The Troubles, a 30-year long between the Irish Republican Army (IRA) and Loyalist paramilitaries.

A cease-fire was reached with the signing of the Good Friday Agreement. A devolved government was formed in Northern Ireland which, despite being suspended numerous times, is still in force today. It is this cease-fire that was at risk with Brexit and Northern Ireland inhabitants were fearful that if a physical or ‘hard’ border was reintroduced, then the IRA would take up arms again and the Troubles would recommence.

Although there is more to the history of British Rule on the island of Ireland, this gives a brief account (if you can call it that) of how the once united island of Ireland became partitioned due to strong cultural, religious and government divergence and the conflicts that arose as a result. The island of Ireland is now an island that is home to two countries, but there are many that hope that one day there will be a unified Ireland once more. I hope this also explains why the topic is a contentious one for some of those living in both the Republic of Ireland and Northern Ireland alike.

FAQ’s about Ireland vs. Northern Ireland

Is Ireland part of the UK?

Northern Ireland is a home country or region of the United Kingdom. But the Republic of Ireland is not part of the UK. It is an independent country.

Is Northern Ireland a country?

How can you tell if you have driven into Northern Ireland?

Can you drive a hire car across the Ireland/Northern Ireland border?

Unless you have specifically told your hire car company that you will be crossing the border, then no. As they are two separate countries, the hire car companies need to ensure the insurance premium covers driving in both countries and this can add significant cost to your rental car budget. And don’t think you can just slip through unnoticed. If the car is fitted with a tracker, the rental car company will be notified and you will be charged a premium for crossing the border without telling them beforehand.

If you have been wondering about the difference between Northern Ireland and Ireland, what those differences are and why, I hope you have found this post useful in explaining and answering those questions.