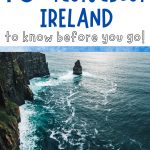 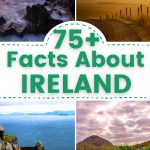 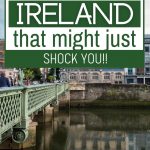 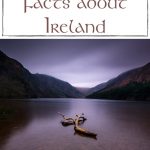 Ireland. A country steeped in history, culture and tradition. Although an island, this little country on the western fringes of Europe has some things you should know about it before you visit. Discover my top picks of the best and most interesting facts about Ireland you should know before you go.

If you are looking to learn some interesting things about Ireland before your trip, then this is the post for you. I’ve uncovered some of the best fun facts about Ireland and you can read them below. I’ve separated each set of facts into sections for easier reading.

The island of Ireland contains two countries, the Republic of Ireland and Northern Ireland. Read this post to discover more about the reason for this.

As a result of there being two countries, there are two currencies. The Euro is the currency in the Republic, while Northern Ireland has the British Pound.

There are also two flags.

There are two capitals, Dublin in the Republic and Belfast in Northern Ireland.

There are two languages. Irish is the official language of the Republic and English in Northern Ireland, although English is the most widely spoken in the Republic.

Road signs and speed limits are in kilometres in the Republic but miles in Northern Ireland.

There is no physical border between the two countries. You’ll know when you have crossed from the Republic into Northern Ireland because distances on road signs and speed limits will change. Also, there will be no Irish versions of place names on road signs or upon entering towns.

There are 26 counties in the Republic of Ireland and 6 in Northern Ireland, bringing the total number of counties in Ireland to 32.

There have been people on Ireland since around 6000BC.

The Celts started arriving from 700BC, and thrived for 2,000 years.

The Vikings started arriving in the 9th century and started establishing Dublin’s main cities along the coast, with Waterford being the first.

In the 12th century, Norman Vikings invaded, initiating the start of over 700 years of British occupation and rule in Ireland. This was the point at which the English language was introduced to Ireland.

Halloween originated from the Celtic harvest festival of Samhain.

Newgrange is 5000 years old, making it older than Stonehenge and the Pyramids of Giza. The winter solstice light floods the tunnel of the burial chamber for 19 minutes. You can apply to a lottery to be one of only sixty people inside the tunnel for this phenomenon.

The Céide Fields in County Mayo are the most extensive Stone Age sites in the world with field systems over 6,000 years old and stone enclosures.

The Hook Head Lighthouse is believed to be the oldest working lighthouse in Europe, possibly the world. The present structure was complete between 1172 and 1245, although there has been one at the site since the 5th century.

Ireland was the last port of call for Titanic before it headed out into the Atlantic Ocean. The final port was Cobh in County Cork.

The Rotunda Hospital on Parnell Square in Dublin is the world’s oldest continuously operating maternity hospital.

St Patrick was not Irish, he was Welsh.

St Patrick was kidnapped by pirates and brought to Ireland. He was sold into slavery and afterwards returned to Britain where he became a monk. He came to Ireland as a missionary to convert the pagans to Christianity.

The shamrock was the symbol which St Patrick used to explain the Holy Trinity.

St Patrick did not chase the snakes from Ireland as is commonly believed. There have never been snakes in Ireland due to it being an island.

Although the colour green is now associated with Ireland and particularly on St Patrick’s Day, he did not in fact wear green. Historians say his colour of choice was light blue.

The first St Patrick’s Day Parade was not held in Ireland but in New York in 1762.

Facts about the geography of Ireland

The highest peak in Ireland is Carrauntoohil in the MacGillycuddy Reeks range in Kerry.

The longest river in Ireland is the Shannon, which stretches for 360km. Its source is in County Cavan and its estuary is in County Limerick.

The largest lake in Ireland is Lough Neagh, located in Northern Ireland.

There are five administrative cities in the Republic of Ireland. They are Dublin, Limerick, Cork, Galway and Waterford. In Northern Ireland, there are also five. They are Belfast, Armagh, Derry, Lisburn and Newry.

15,000 years ago Ireland was covered in glaciers. The movement of these ice sheets stripped the soil, leaving tracts of flat, limestone ground, easily viewed in the Burren National Park.

The Wild Atlantic Way is the world’s longest coastal driving route, covering 2,500km from the Malin Head in Donegal to the Old Head in Kinsale in Cork.

Muckanaghederdauhaulia, in County Galway, is the longest town name in Ireland at 22 letters.

The Cliffs of Moher have featured in famous movies including Harry Potter and the Half-Blood Prince, Princess Bride, and The Mackintosh Man.

The largest zinc mine in Europe, and fifth largest in the world, is located in County Meath.

As well as a lack of snakes, Ireland also doesn’t have several common species found in Europe on its shores, such as moles, weasels, polecats or roe deer.

Croaghaun, on Achill Island in County Mayo, are the second-highest cliffs in Europe at a height of 688 metres above the Atlantic Ocean.

The largest county by area is County Cork at 7,457km2.

Dublin is home to approximately a quarter of the population of the Republic of Ireland.

The Irish flag was inspired by the French one with green and orange in place of blue and red.

During the 1800’s there was mass emigration (see below).

The oldest pub in the world is located in Athlone. Sean’s Bar was opened in 900AD and is in the Guinness Book of World Records.

82% of the Irish population are Roman Catholics.

The national sports of Ireland are Hurling and Gaelic Football.

It is illegal to be so drunk in a public space if you are deemed to be a danger to yourself or others. This came into law in 2009. Source.

Some of the oldest harps in Ireland are housed in the Old Library in Trinity College, Dublin.

The Shamrock has been trademarked by the Irish Government. In the 1980s, Germany once tried to use the symbol. Ireland lost their initial case against Germany using it but won on appeal in the German Supreme court in 1985 to defend its right to use the shamrock as its national symbol. It is trademarked now and is used by the government on Aer Lingus planes, on stamps and the air traffic control call sign for Ireland is “Shamrock”.

An Irishman, Cedric Gibbons, designed the statue given out to winners at the Oscars.

Ireland is home to the world’s oldest yacht club founded in 1720.

Croke Park is the fourth largest stadium in Europe and is home to the Gaelic games, hurling and Gaelic football.

Ireland has had four winners of the Nobel Prize for Literature. They are William Butler Yeats, George Bernard Shaw, Samuel Beckett and Séamus Heaney.

The Argentinian navy was founded by an Irishman.

And the submarine was also invented by an Irishman, John Philip Holland.

Ireland has both a President and Taoiseach (Prime Minister), but the President has very little power. The Taoiseach controls the government.

There have been two female presidents of Ireland, both named Mary. This is more than most countries in the world.

The White House, home to the President of the United States of America, was designed by an Irishman called James Hoban.

The Irish Wolfhound is the tallest dog breed in the world.

The second-longest running late-night talk show is the Late Late Show. It began in 1965 and has only had three presenters.

The Phoenix Park is twice the size of Central Park in New York.

Facts about the famine in Ireland

In the 1840’s the staple food of Ireland was the potato.

The Great Famine came about as a result of the failure of potato crops due to blight in successive years between 1845 and 1849.

The blight was accidently brought to Ireland from America.

It is estimated that 1 million people died due to starvation, and more than 2 million fled between 1845 and 1855.

Before the Great Famine, the population of Ireland was estimated at 8 million, almost twice today’s population.

The Famine spurred the drive for independence due to the appalling way in which the British government handled the Great Famine, continuing to export other Irish food while millions starved.

Ships that left Irish shores during the Great Famine were dubbed “coffin ships”, as many who boarded never reached the shores of America, Canada or Australia, having died on the journey to what they hoped would be a better life.

Ireland has been at the forefront of Famine relief in modern days and, as a result, its people have given more to the fundraising efforts such as Live Aid per head of population than any other nation on earth.

Have you enjoyed these interesting facts about Ireland? Did you learn a few new things?

This website uses cookies to improve your experience while you navigate through the website. Out of these cookies, the cookies that are categorized as necessary are stored on your browser as they are essential for the working of basic functionalities of the website. We also use third-party cookies that help us analyze and understand how you use this website. These cookies will be stored in your browser only with your consent. You also have the option to opt-out of these cookies. But opting out of some of these cookies may have an effect on your browsing experience.
Necessary Always Enabled
Necessary cookies are absolutely essential for the website to function properly. This category only includes cookies that ensures basic functionalities and security features of the website. These cookies do not store any personal information.
Non-necessary
Any cookies that may not be particularly necessary for the website to function and is used specifically to collect user personal data via analytics, ads, other embedded contents are termed as non-necessary cookies. It is mandatory to procure user consent prior to running these cookies on your website.
SAVE & ACCEPT