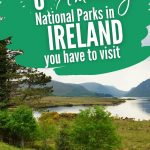 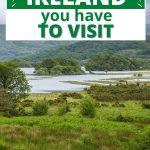 Some of the most beautiful parts of the Emerald Isle can be found within the National Parks in Ireland. From wonderful woodlands, barren landscapes and bogs, the national parks of Ireland are among the best national parks in Europe. In this post I am introducing you to them and telling you why you need to visit them.

While there may only be 6 national parks in Ireland, they have certainly earned their places as national parks. Some were part of huge estates which were donated to the Irish State. Others are unique landscapes found nowhere else on earth.

All of the national parks in Ireland are managed by the National Parks and Wildlife Service, Ireland which is no mean feat gives the collective size of the Irish National Parks.

There are 6 national parks in Ireland, 5 located along the west coast of Ireland and one on the east coast. They are

Read my 5-Day Wild Atlantic Way Itinerary to discover how to enjoy the Ring of Kerry and the Killarney National Park during your visit to Ireland.

The park was designated a Biosphere Reserve in 1981 by UNESCO and forms part of a special area of conservation. Within this national park of Ireland are the highest mountain range, the McGillycuddy Reeks, along with the three lakes and the eastern side of the Purple Mountains. Along with mountains and lakes, the largest of which has over 30 islands, you will also find waterfalls and woods which include native oakwoods and yew woods. The lakes of the Killarney National Park are joined together but have very different biodiversities and makeup around a quarter of the park’s area.

Killarney National Park is home to an abundance of evergreen trees, shrubs and lichens which thrive in the climate of the park. You will also find Ireland’s only wild herd of red deer in the park, along with many other animals, birds and insects.

What to do in Killarney National Park

Hiking in Killarney National Park is a popular activity as is fishing and boating. However, the latter two can only be done with a license or licensed operator.

As mentioned, Killarney National Park was founded after the Muckross Estate was donated to the Irish State and visitors can still visit Muckross House, Traditional Farms and the Abbey. Another place to visit in the park is Ross Castle, and Knockreer House and Gardens, home to the national park education centre (the house is not open to the public, but the gardens are).

Inishfallen, on one of the islands in Lough Leane, is another place to visit and is where you’ll find the ruins of a priory. And no visit to this national park would be complete without a visit to the Torc Waterfall.

Killarney National Park Visitor Centre is located in Killarney House and is open 7-days a week.

Best Killarney National Park tours: There are several different tours to take from Killarney Town of the national park.

The Connemara National Park, Ireland is located in the west of Ireland in County Galway and is spread over nearly 3,000 hectares and encompasses mountains, heaths, grasslands and bogs. You’ll also find woodland in this beautiful national part which was established in 1980. The park originally formed part of the lands of the Kylemore Abbey Estate.

Mountains found in the Connemara National Park include Benbaun, Bencullagh, Benbrack and Muckanaght, part of the famous Twelve Bens range. Connemara is famous for its rugged landscape which is home to Connemara ponies. Wild herds roam free here and it is a bonus if you manage to see them during your visit.

The best access to the park is via Letterfrack, a 19th-century Quaker-founded village. The area of Connemara in County Galway is a Gaeltacht area, so listen out for conversations held in Irish.

What to do in Connemara National Park

As well as trying to spot the Connemara ponies, there are other things to do in Connemara National Park. As mentioned, the park was once part of the Kylemore Abbey Estate and visitors can still enter Kylemore Abbey and enjoy the walled gardens.

For hikers, the circular Diamond Hill Walks are enjoyable and experienced hikers and walkers could attempt to climb the Twelve Bens so long as they go fully equipped and prepared.

There are glimpses of Connemara’s history in the park through the 4,000-year-old megalithic tombs and old farmer ridges.

The Connemara Visitor Centre is open from March to October and has displays on the flora and fauna of the park and on how the landscape developed over time.

Best Connemara National Park tours: If you are visiting Galway and would like to take a tour of Connemara, then consider one of these.

The Burren National Park, Ireland is located across northern County Clare and is a very unique landscape. Covering approximately 1,500 hectares, this rocky, wind-swept region is a striated lunar-like landscape of barren grey limestone which was formed millions of years ago under ancient seas and was then forced upwards.

The word Burren comes from the Irish word “Boireann” meaning rocky place and is fitting given the extent of the exposed Karst limestone pavement it is famous for. And while at first, you might think this is a completely barren land, you would be wrong.

The Burren contains examples of all major habitats including hazel scrub, turloughs, lakes, cliffs, fens, calcareous grasslands, ash/hazel woodlands and petrifying springs. Wildflowers in spring also bring the Burren alive with colour. Animals that can be found here include pine marten, badgers, foxes and stoats while otters and seals inhabit the coastal shores of the park.

What to do in the Burren National Park

The Burren is a walker’s paradise and there are lots of trails and hikes to be enjoyed. Aillwee Caves are a series of spectacular show caves which must be visited.

The ancient history of the park is visible through the more than 2,500 historical sites in the national park. One of Ireland’s most iconic ancient monuments is located in the Burren National Park, the Poulnabrone Dolmen, which is 5,000 years old. There are other tombs and ring forts to visit including the Iron Age stone fort of Cahercommaun.

The house featured in the TV series “Father Ted” is also located in the Burren National Park, but can be hard to find. You cannot enter the property but can take pictures from outside the gates.

The Burren National Park Visitor Centre is located in Corofin and is open to the public from April to September and provides information about the flora, fauna and geology of the park while promoting conservation through awareness and education.

Established in 1991, this national park is a mix of upland blanket bog and heath, wooded valleys, lowlands, streams and forests. The park is home to several protected species of animals including rare otters and ten bat species. Threatened birds species that are found in the park include peregrine falcon and the whooper swan.

The Wicklow Mountains were once inaccessible, providing a hiding place for opponents of British Rule in the 17th and 18th centuries. But the building of the Military Road opened it up and you can still drive this road, albeit a modern version of it.

The oldest established walking route in Ireland passes through the park, the Wicklow Way, which extends from Marlay Park in Dublin to Clonegal in County Carlow, some 127km long.

What to do in Wicklow Mountains National Park

Walking and hiking are popular within this national park, and although no peak exceeds 915m, the mountains can be dangerous in bad weather, so only experienced hikers/walkers who are fully prepared should venture out away from main roads.

There are scenic drives that carve a path through the Wicklow Mountains National Park including the Military Road (R115) and the R756 through the Wicklow Gap. As a child, my family used to take these roads to reach our relations in Bray and they pass through beautiful landscapes.

But the most popular place to visit in the Wicklow Mountains National Park is the monastic site of Glendalough. Established by Saint Kevin in the 6th century, the Glendalough site is famous for the Round Tower and other monastic buildings as well as its two lakes.

The Powerscourt Estate is another popular place to visit and the Glenmacnass Waterfall is worth visiting, which stands at 80m in height.

Glenveagh National Park, Ireland is one of the most remote in Ireland and covers nearly 17,000 hectares making it the second largest of the national parks of Ireland.  Located in County Donegal, it was established in 1986 and is a park dominated by lakes, mountains, waterfalls, and native oak woodlands. You’ll find the Derryveagh Mountains at the heart of it.

The centre of the park is on the edge of Lough Veagh where you will find the 19th-century castellated mansion of Glenveagh Castle. The area around the castle was managed as a private deer park before being handed over to the State in the 1970s.

Glenveagh National Park is home to the largest herd of red deer in Ireland after they were reintroduced by the former landowner John George Adare’s wife in the late 1800s. Deer are not the only inhabitants though. The national park is recognised as a Special Protection Area for the golden eagle (reintroduced in 2000) and also has foxes, badgers, owls, pine martens and peregrine falcon as residents.

What to do in Glenveagh National Park

Walking and hiking are popular past-times in this national park. Experienced hikers can take on the highest peak in Donegal, Mount Errigal which lies on the western edge of the Glenveagh National Park. There are lots of trails for people with various abilities.

Visitors to the national park can visit Glenveagh Castle by either walking from the Visitor’s Centre or taking the bus (for a fee). Visits are by guided tours only. Take a hike out to see Astellen Falls, which lie about 3km from the castle, but go prepared, especially if it’s been raining.

The visitor centre is open daily from 9.15am to 5.15am and there are toilets available there.

The park is dominated by the Nephin Beg range of mountains and the Owenduff Bog, one of the last intact active blanket bogs in Western Europe. Atlantic bog and mountainous terrain form much of the landscape of this national park in Ireland.

There is a diverse collection of inhabitants which have made this national park their home including whooper swans and peregrine falcons.

What to do in Ballycroy National Park

There are lots of walking trails in the Ballycroy National Park. A gentle 1.8km trail offers views towards Achill and across the Nephin mountains.

The best tours for visiting multiple national parks: If you would like to visit some national parks on a longer tour of Ireland, then we recommend these tours.

While there are only 6 Irish national parks, each is unique and holds a stunning landscape different from the next. If you are planning a trip to Ireland, I highly recommend you allow time to visit one of the national parks in Ireland. You won’t be disappointed.