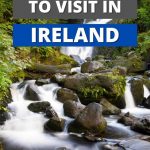 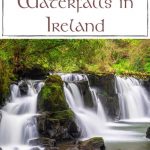 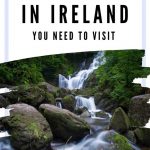 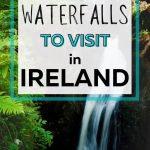 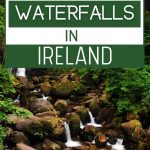 Best Waterfalls in Ireland to visit

In Ireland, waterfalls are aplenty thanks to rivers and plenty of rainfall. I’ve collated some of the best waterfalls in Ireland here, to share with you, so you can put a few of these wonders of nature on your itinerary for your next visit to the Emerald Isle. If you love waterfalls, you are going to love these!

One of the most famous waterfalls in Ireland has to be the Torc Waterfall in the Killarney National Park. This Killarney waterfall called Easach Toirc in Irish, which means cascade of the wild boar, is a 20m high waterfall.

Formed by the Owengariff River as it drains from the Devil’s Punchbowl corrie lake at Mangelton Mountain, the cascades are 110m long. It lies at the base of the Torc Mountain in the Killarney National Park, approximately 7km from Killarney Town, and 2.5km from the gates of Muckross House.

Located 4km from Newport in County Tipperary and 5km from Murroe on the R506 road are the Clare Glens. Two looped trails through wooded areas lead to a gorge separated by the banks of the Clare River which creates part of the border with Tipperary and Limerick, and there you will find these beautiful waterfall cascades.

The waterfall is located at the lower part of the Clare Glens and is popular with kayakers.

There are two car parks for visitors, a playground, picnic areas and toilets in the car park.

Glenbarrow is the source of Ireland’s second-longest river, the Barrow, and is a very scenic part of the Slieve Bloom Mountains.

Through this area are three looped walks, with one being denoted the Waterfall Loop (blue trail). Taking this 7km loop through woodland will lead you to the Glenbarrow Waterfall. This three-tiered waterfall is also referred to as the Clamp Hole Waterfall.

The area is peaceful, tranquil, and remote but does have parking at the trailhead. Located just 30 minutes from Portlaoise, it is one of the best things to visit in County Laois.

The Glencar Waterfall lies along the border of Sligo and Leitrim and is the only waterfall near Sligo. Situated near Glencar Lough, this is a 15m high, tiered waterfall set in picturesque woodland.

Glencar Lough and the Glencar Waterfall are located just less than 15km from Sligo Town and 14km from Manorhamilton in County Leitrim.

From the car park, the waterfall is a short walk with lots of viewing platforms from which to view the falls. There are other waterfalls visible from the road, but this particular one is the most stunning. As well as the car park, there are toilets, a picnic area, playground, tourist information point and the TeaSHED Café for refreshments. This area is also wheel-chair friendly.

The Glencar Waterfall was an inspiration for WB Yeats and features in his poem “The Stolen Child”.

Located between the Glensaul River and Lough Mask, in a Gaeltacht area of southern Mayo, is an impressive waterfall, Tourmakeady.

Situated in the Tourmakeady People’s Millenium Forest, the waterfall can be found midway along a 2.5km nature trail, the Tourmakeady Woodland Walk, around 1 hour from the car park. During springtime, the woodland floor becomes a blanket of bluebells.

Located 20km from Kenmare in Gleninchaquin Park (a payable venue) is a 140m high waterfall. This rock face waterfall, on a privately owned farm and park is located on the north side of the Beara Peninsula.

The Gleninchaquin Waterfall feeds the lakes of the valley floor such as Lough Inchaquin, Uragh, and Cloonee. There are woodlands, meadows, and a 6km looped trail as well as other walking routes around the waterfall and cascades, six in total.

There is ample parking and picnic areas, making it the perfect place for a family day out in Kerry.

Through the Clare market town of Ennistymon flows the River Cullenagh, which becomes the Inagh River after the cascades.

Along a narrow street near the bridge over the river is the oldest part of town and a little below the bridge, the river rushes over an extensive ridge of rocks resulting in beautiful cascades known as the Ennistymon Cascades.

Formed by the River Mahon and cascading from the Comeragh Plateau is an 80m high waterfall. Mahon Falls, Ireland is a waterfall in Waterford that is one of the best things to see in County Waterford.

Signposted from the N25, the falls can be reached via a 4km looped trail near Lemybrien. Called Eas na Machan in Irish, there is a footpath from the car park near the falls, a walk that will take approximately 20 minutes each way if you don’t want to do the trail from Lemybrien.

If you are looking for waterfalls in Northern Ireland, then head for Dunseverick Falls in County Antrim. These small waterfall cascades flow directly into the sea making them a unique waterfall on this list.

The waterfall is easy to walk to from the nearby harbour where there is a little car park you can stop in. There is also a nearby beach and nice views from above the waterfall. However be warned, it is not well signposted.

Aassaranca Waterfall, Donegal is located 8km east of the town of Ardara and close to the Donegal coast. Also sometimes called the Maghera Waterfall, it is easily accessed along the way to Maghera itself.

Called Eas a’Ranca in Irish, it is easy to spot from the roadside on a country road off the N56 road and handily has a small car park/layby right beside it.

Located at the base of the Glensoulan Valley on the River Dargle, the waterfall lies on the Powerscourt Estate 9km from the main estate gate.

Set in woodland that features beech, oak, pine, larch, and even giant redwoods, it is overlooked by the peak of Djouce and Maulin and has a car park, small café, picnic area, toilets, and playground.

Located not far from the village of Leenane in Connemara, you will find the beautiful Aasleagh Falls in Mayo. The falls lie along the River Erriff approximately 1km from the Mayo/Galway border. The waterfall lies at a point just before the River Erriff meets Killary harbour, a glacial fjord.

The falls, called Eas Liath in Irish, can be reached via a short walk, on a footpath, from two laybys on either side of the R335 road. The water cascades over a rocky ledge a few meters tall. There is an area where you can enjoy a picnic but do remember your wellies, especially if visiting after rainfall as the ground getting very mucky.

The river is popular for salmon and trout fishing and part of the Western Walk starts here before carrying on for 12km to Sheeffry. It is also where Sir David Attenborough was filmed by the BBC as part of a documentary.

Halfway between Larne and Carrickfergus, you will find a National Trust site where you can see one of the best waterfalls in Northern Ireland, the Glenoe Waterfall.

You can reach this Antrim waterfall on a short walk from Gleno village. In the area known as the Glens of Antrim, you will walk around the edge of lush glens to reach the gorge where the waterfall lies.  Steps meander up and down the wet valley so you have lots of opportunities to catch views of the waterfall.

If you reach the top of the steep brae you will come across St Columbas Church of Ireland with picturesque views across the valley.

If you are looking for a Wicklow mountains waterfall to visit, then head to the Glenmacnass Waterfall, one of the highest waterfalls in Ireland. Located at the head of the Glenmacnass Valley, Gleann Log an Easa (Irish) meaning the glen of the hollow of the waterfall is an 80m waterfall with three staggered drops.

The waterfall is accessed by the R115 Military Road connecting the Sally Gap to Laragh Village. There is a car park at the top of the falls where there are vantage points. There is no trail to the base of the falls but it can be viewed from the road. Note, you cannot access the bottom of the waterfall as it lies on private property.

A Wicklow waterfall worth visiting is the Poulanass Waterfall. Called Poll an Eas in Irish meaning hole of the waterfall, it is reachable from the Upper Lake car park at Glendalough, a walk of around 1.7km.

This small, cascading waterfall flows down to the Avonmore River from a height of 5m.

There is a designated route (pink route) starting behind the visitors centre at Glendalough which has a steep climb to reach the waterfall.

One of the most beautiful waterfalls in Donegal is the Glenvein Waterfall. Donegal has a few waterfalls and this is one of the best to visit. It is one of Inishowen’s most spectacular natural attractions, set in a wooded stream valley a short walk from the main car park.

The Glenevin Waterfall is a wedged-shaped fall and cascades freshwater over the black rock from a height of 9m. The basin at the foot of the waterfall is called Pohl-an-eas meaning ferment pool and the name comes from the foam that lies on the surface of the pool.

There are two car parks and the trail to the waterfall starts beside the Glen House B&B at the main car park. It is well signposted and has picnic areas and vantage points along the route to the waterfall. There are 4 walking trails in all ranging from 2km to 10.5km with varying degrees of difficulty.

Of all the waterfalls Northern Ireland has to offer, Ess-na-Larach in the Glenariff Forest Park is one of the most beautiful.

Lying along the Glenariff River and falling from a height of almost 11m, this is one of two waterfalls in the park, with the other being Ess-na-Crub.

The park lies off the A43 and is well signposted. The walk from the visitor centre is 800m, making it a round-trip of just over 1km. A visit to the Gelnariff Forest Park to view its beautiful waterfalls is one of the best things to do in County Antrim.

Ireland’s tallest waterfall can be found lying on the Sligo/Leitrim border not far from Glencar Lough. Although it is the tallest waterfall in Ireland at 150m, it does not flow continuously throughout the year, drying up during periods of warm, dry weather.

Also called Sruth in Aghaidh An Aird meaning stream against the height, it gets its name from the fact that under southerly wind conditions the waterfall is blown upward and back over the cliff from which it flows.

Located in the Dartry Mountains, it is a 45-minute walk to the waterfall site and is perfect for visiting in the off-peak season when it is most likely to be flowing.

These are just a few of the waterfalls of Ireland and are among the most beautiful to visit. If you love hearing the roar of a waterfall, then make sure to put one of these Irish waterfalls on your itinerary for your next visit to, or around, the Emerald Isle.